Foldable e-bikes are everywhere. However, only a few actually have powerful motors that maintain stable speed. If you’re commonly traveling on uphill roads, one powerful e-bike which you might love to have will be Overfly Folding Electric Bike. Today, we will be giving you an overview of its features.

Overfly Folding Electric Bike uses a black motif for its design. The handlebars, saddle, saddle post, and other components of this e-bike is painted black, White stickers are installed on the crossbar and the upper end of the fork. Usage of black color as the main color for this bike’s body give it a simple look. The white stickers, on the other hand, give this bike personality.

Another striking feature that makes the appearance of this bike notable is the wheels. The fat tires have a sporty look. Reflectors are installed on the rims of the front and rear wheels. On the other hand, the fat tires look sturdy and are engraved with cool brand graphics.

One thing that almost disappointed us was that this bike doesn’t have fork suspensions or rear shock absorber. Upon closer inspection we found out that the saddle makes up for the lack of such features. The saddle itself is the suspension system. The saddle post is actually a hybrid shock absorber that supports the weight of the saddle and provides rider stability at the same time. Underneath the saddle itself are two sets of springs that absorb impact as the bike tramples stones or goes into rough roads.

Another striking function of the Overfly Folding Electric Bike is its LCD. The LCD has a backlight which enables you to see how fast you’re going, how much distance you’ve covered, how much battery power is left and many others when riding at night.

Overfly Folding Electric Bike is powered by Bafang high-speed brushless motor. The motor itself is pretty strong and makes this bike perfect for uphill terrains, beaches, and rough roads. On default mode, this e-bike can run up to 20 miles per hour using the power of the motor alone. If you want to go a bit faster, you may change the setting and make this bike run for 30+ miles per hour.

The gears of this bike shift like a dream. So far, we haven’t encountered any issues as the bike changes from gear 1 to gear 7. There’s little change in speed when riding uphill or on uneven surfaces. The suspension saddle makes bumps manageable when riding this bike which doesn’t have fork suspensions or rear shock absorber.

Still, there’s a significant decrease in speed when someone heavy rides this bike. With this, we have come to the conclusion that this e-bike’s motor doesn’t have enough power to bear heavy loads.

For you to be safe, we would like to inform you that changing the default speed of this e-bike will void the warranty.

This foldable e-bike is really portable. The pedals, the handlebar, and the crossbar fold easily. Its body is also lightweight which makes it an ideal e-bike for teenagers and children ages 8-12 years old.

In summary, the following are notable features of this e-bike:

Overfly Folding Electric Bike might be what you need if you’re looking for a foldable e-bike that has a stable acceleration. It is perfect if you frequently travel roads with lots of uphills and uneven surfaces. This e-bike symbolizes speed and strength at the same time. 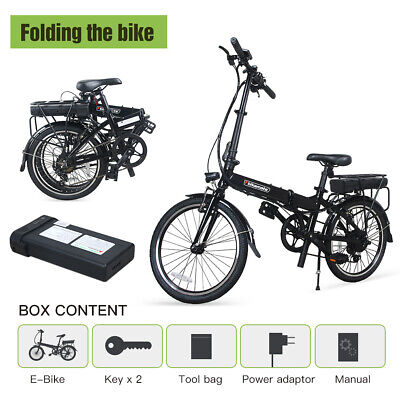 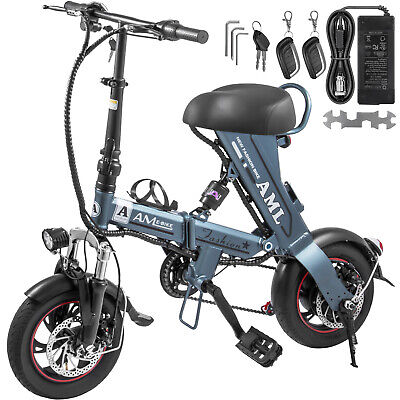 Swagtron EB-8 Outlaw Fat Tire Electric Bike The mountains have lots of wonderful places that you need to discover. However, the difficult pathways discourage you from fishing on ponds, exploring dense forests, hunting animals, and taking photos of wildflowers. Still, it's possible for you to beat difficult mountain ...

Are you the type of person who's not afraid to tackle perilous mountain paths and takes joy in immersing yourself in professional riding experience? Riding enthusiasts see that e-bike racing is getting popular right now. If you're preparing to become an e-bike racing champion, then one good sports grade electric ...

Any cookies that may not be particularly necessary for the website to function and is used specifically to collect user personal data via analytics, ads, other embedded contents are termed as non-necessary cookies. It is mandatory to procure user consent prior to running these cookies on your website.